Hire our Tanoura Dancer in Dubai and Abu Dhabi

Hire our Tanoura Dancer in Dubai and Abu Dhabi

Tanoura in English means Skirt…This is a folkloristic dance very common in Middle East, Egypt and Turkey. It’s very popular show in dubai also in desert safari trip and as arabic entertainment for parties and weddings. Also in corporate parties can be a very good match for your guests to show a unique show, the spin goes on for more then 10 minutes and the artist circles around himself continuously with a led costume to be turned on and different layers to be showed minute by minute, book our tanoura show performers today!

In Dubai, the Tanoura dance is highly well-liked, and its performers stand out for donning colorful skirts. The skirts are created in the Sufi tradition with the intention of preserving the old custom.

The backup dancers are the planets, and the lead dancer is the sun. The dancers move in a circular pattern to symbolize the spinning of the earth, which starts at one location and ends there.

Tanoura dance has a spiritual focus and aims to help people connect with their inner spiritual purity. Therefore, it is stated that when performing the Tanoura, the dancers enter a trance-like state and experience a sensation of being with God. Because the dancers do not display any indications of fatigue, those who see this performance are astounded. 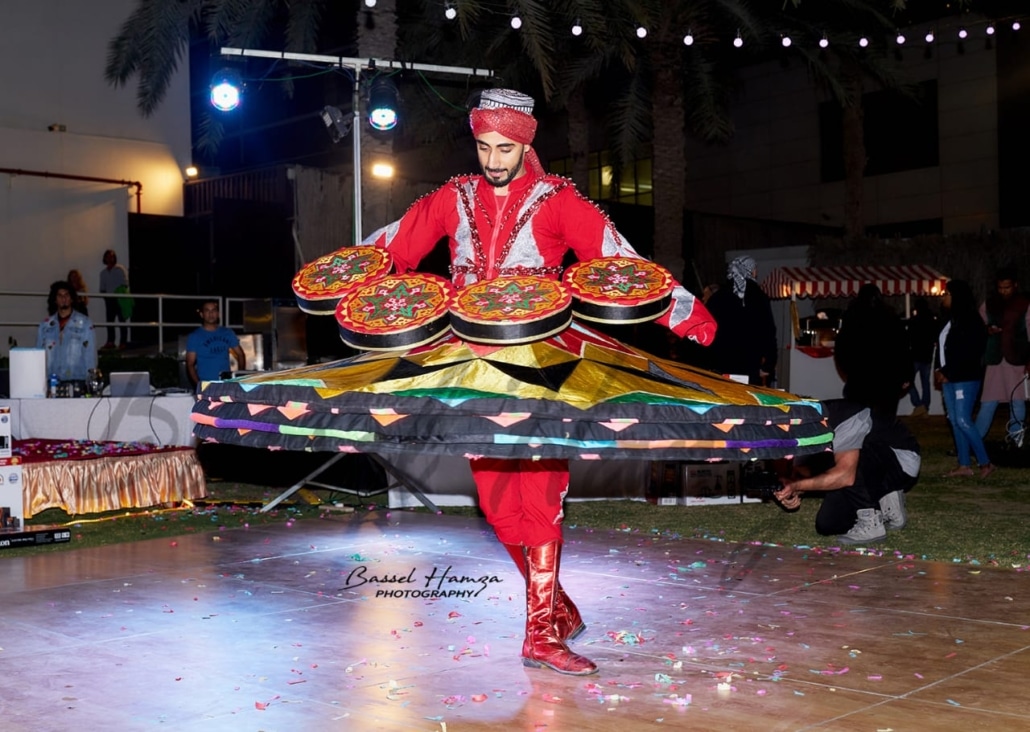 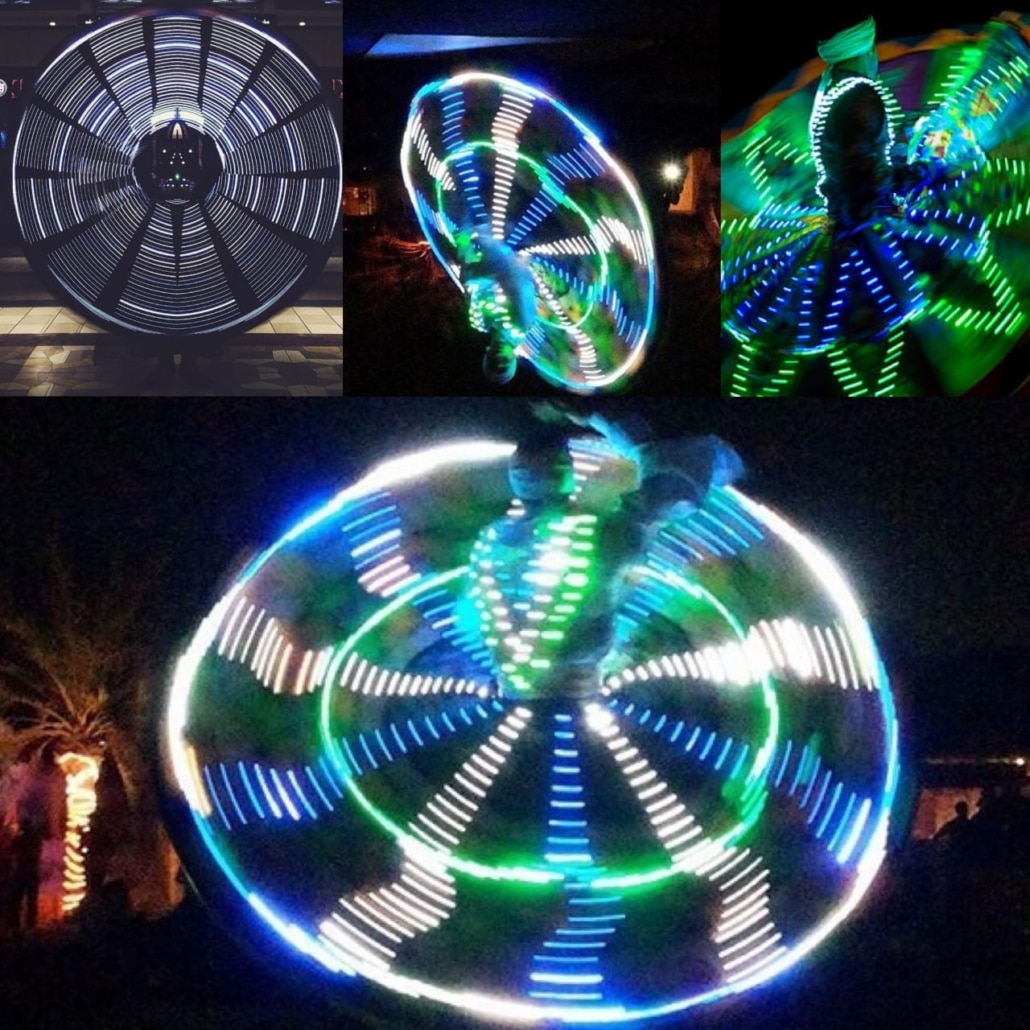 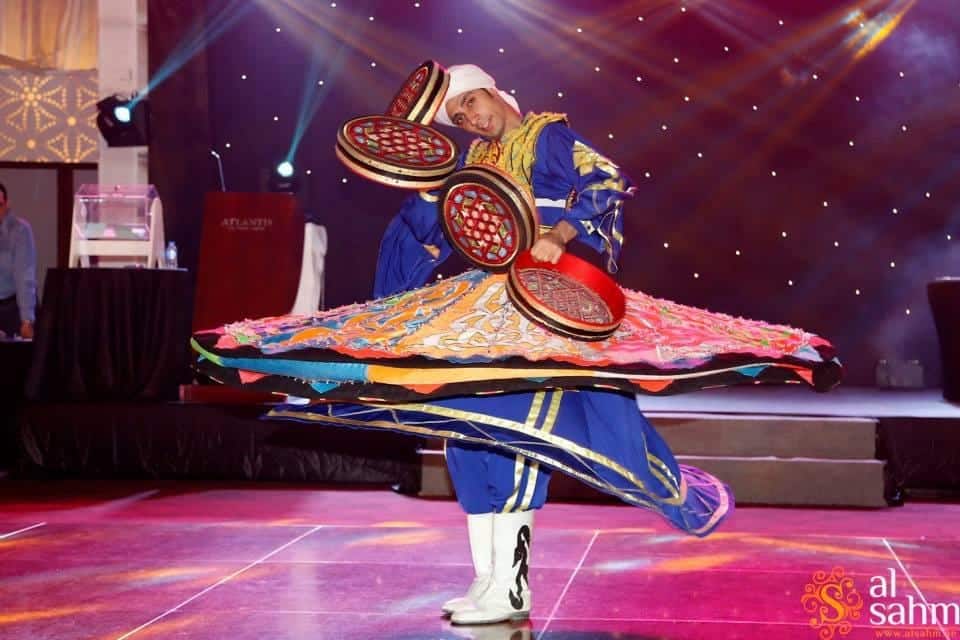 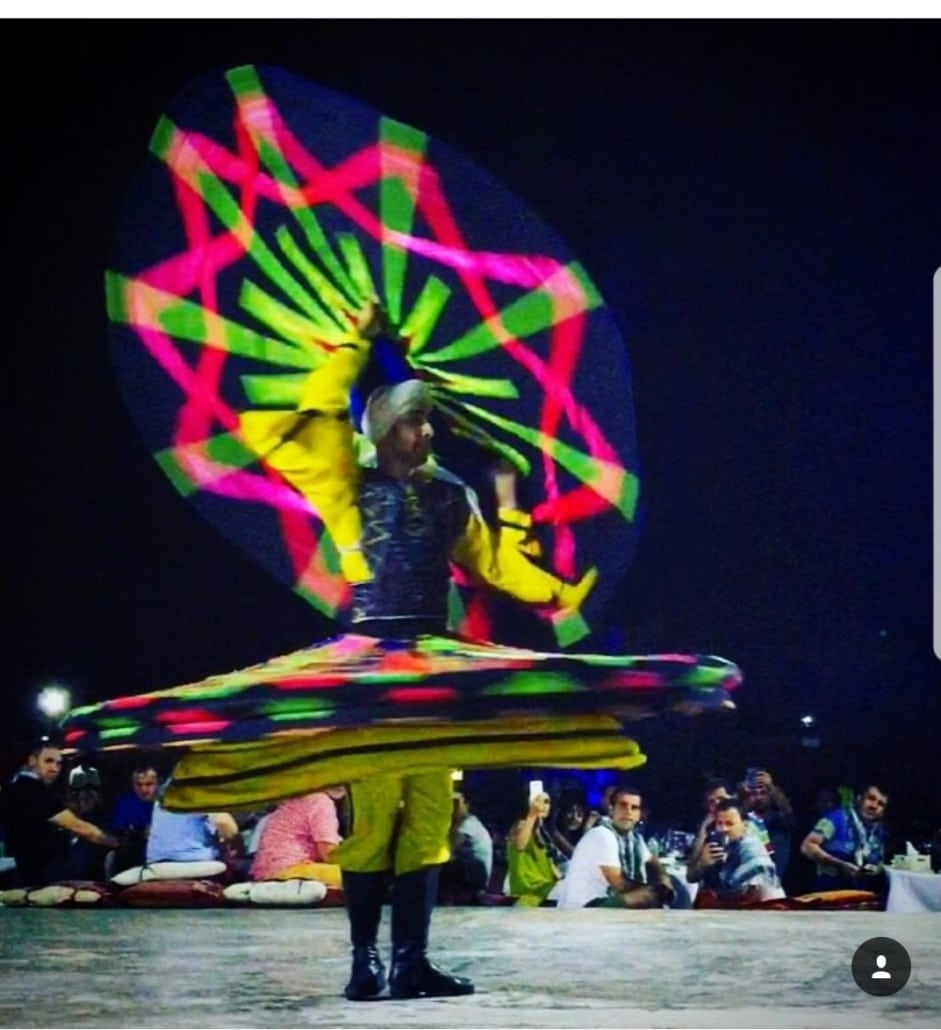 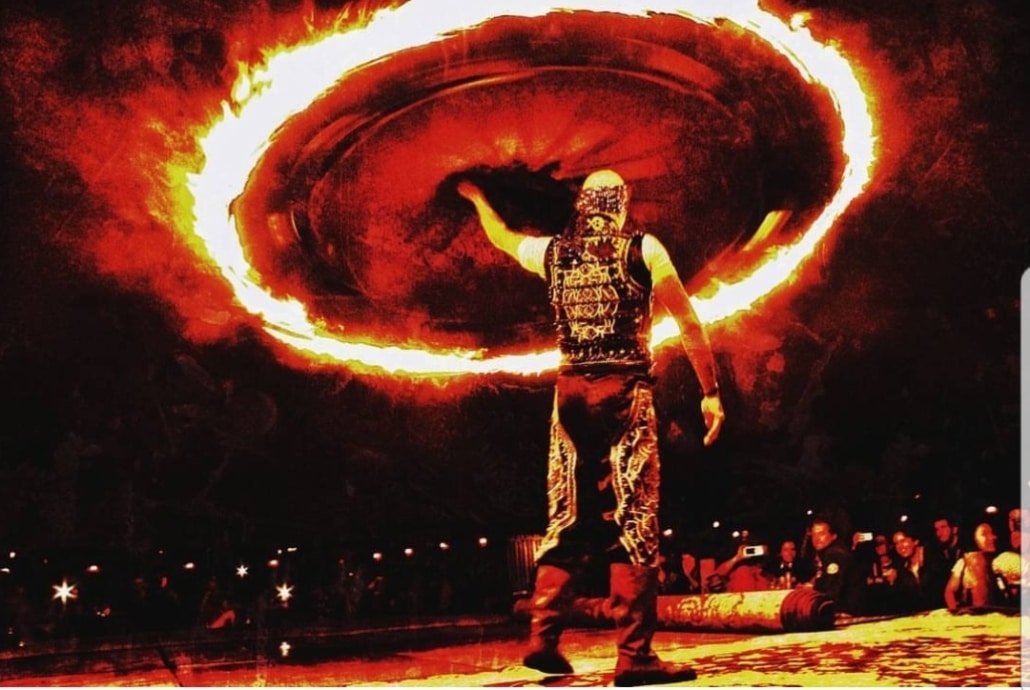 How Is Tanoura Dance Done?

Tanoura dance performances can vary and be unique, but what is typically seen is the presence of a lead dancer who assumes the role of the sun and the background dancers spin about like planets. Different presentations with different concepts, clothing, and choreographies can be anticipated. The majority of performances take place in a dark environment, and on occasion, decorative lights are placed on the skirts to provide color and charm to the dance. Tanoura dancers dress a range of brightly colored costumes and skirts, but more significantly, the hues of the skirts they don can change from one location to another, depending on the locale, the style of show, and the planners' preferences. Dancers typically wear four-round skirts, which look enormous platters. They spin, lift their skirts above their heads, tuck them in, change and morph them in various ways, all while moving rhythmically and artistically with a special tenderness and affection. Each performance starts with a group of singers reciting poetry from antiquity called "Al Tawasheeh" to evoke a sense of majesty, spiritual excitement, and mysticism. As the singers gradually build the best mood, the dancing motions start, and gradually the figures start to take shape. The swirlings are adjusted to the rhythmic tone of the music that is performed live to give the impression that the dancers are riding on the waves of music. Musicians beat their Egyptian drums or "Tabla" along with other musical instruments such as the pharaonic lute, percussion, and Sagat (used by ballet dancers). The music becomes louder and louder as it progresses, and at the very end, different Egyptian drums play in unison. With a unified and melodic melody, they create a sense of reaching the Lord and being at one with God, and every aspect of the dance exalts and praises the greatness of the sole creator. The three major components of a Tanoura dance performance are traditional. First comes the introduction, which is accompanied by the singing of local, nostalgic, and traditional songs. From the outset, singers create a delightful anticipation for the audience, while musicians set the stage with various oriental music. The major dancers are then introduced in some way, and this primes the audience to enjoy an interesting and visually appealing performance. Finally, Tanoura dance, with its skilled performers, overpowers the entire scenario and seizes control of the stage.

The Spiritual Principles of the Tanoura Dance

Sufi dancers claim to experience a variety of emotions during Tanoura dance, and they think these religious-mystical performances put them into certain inspiring trance states. These emotions include inner spiritual purity, submission to the creator, reaching the pinnacle of mysticism, and oneness with the divine essence. The fact that these virtuous dancers can spin around for up to an hour without showing any signs of nausea or dizziness can serve as evidence that they believe in the mystic tranquility of Tanoura dance, even though it may seem unbelievable that dance could give rise to such a supernatural power in a human mind.

The Past of Tanoura dance Tanoura dance, which has recently become quite popular in Dubai, is thought to have originated in Turkey and particularly Egypt. Its defining characteristic is the dancers' multicolored skirts. The Sufi Brotherhood is where the tanoura dance first emerged in the 12th century. Tanoura dance also adopted this well-known fashion trend. Sufis traditionally perform religious ceremonies while dressed in long, similar white garments from top to bottom and huge round skirts.

Tanoura Dance's guiding principles and ideologies Rotations make the tanoura dance philosophy clear. This ideology and belief holds that the world begins at one point, rotates incessantly, intensifies with time, and eventually returns to that same point, where it eventually comes to an end, symbolically representing the cycle of life. The beginning and end of the spinning, each with profound routines, explain the concept of this dance with the perfect language of art. In the course of this movement, many dramatical performances are placed. One lead dancer plays the part of the sun, while the other dancers in the backdrop play the parts of the planets, as we mentioned earlier. The lead dancer maneuvers the four skirts, which represent the four seasons of the year, around himself with incredible precision. He moves counterclockwise, raising and lowering several skirts on his body one at a time and occasionally all at once. This motion is akin to turning the Kaaba (the Muslim world's holiest shrine in Mecca) around during the Hajj ceremony. The dancer lifts and lowers his arms simultaneously during a ceremony as a representation of the union of the earth and the heavens. Mystical states immerse the dancer in a state of spiritual ecstasy as they strive to be a light that reaches the sky. The hypnotic and extraordinary Tanoura dance performance takes place in a dimly lit room filled with intense emotion, and occasionally the audience's passionate and excited applause can be heard, indicating that the scene's extraordinary attraction has touched and captured the very essence of their being. Tanoura dance is performed with a religious theme, yet this does not lessen its impact on nonreligious people or visitors from other countries. Everyone can be entranced by the tranquil and imaginative performance of this extraordinary dance.